"Is everyone alright? I've got some curatives here, if anyone needs them. Just leave it to me."

A member of a somewhat-successful merchant family in Adlehyde, Jacqueline "Jay" Barber left home to make her own name in the world, one not connected to her family. She is an accomplished apothecary and Crest Sorceress, and forms her trade around these skills. After the invasion of her home town, Jacqueline formed a merchant group called the 'Caravan Kinship' with her friends and set out on a journey to make the world a better place, one sale at a time. The role of leadership sometimes weighs heavily on her shoulders, but she does what she can for her allies and the people she meets along the way.

The Barber family has lived in Adlehyde for quite some time, living a modestly successful life as merchants in the peaceful city. Jacqueline is the fourth child of Frederick and Madeline Barber, the former heads of the family. There were few expectations on her shoulders as her three brothers were the ones expected to handle most of the business once their parents passed it on to them, having already received most of the training. Her only task was to make the family look good and avoid doing anything that might reflect poorly on them. She began to grow dissatisfied and distant, until eventually she began to shut herself in her room for hours at a time, coming out only for meals or when she wasn't given any choice. She read many books during that time, filling her head with fantasies and visions of adventurous folk braving the sands. In the end, it only served to intensify her yearning for more.

She wasn't satisfied. She wanted more out of life, and she didn't want it handed to her on a plate. She felt a desire to achieve greatness on her own merits. And so, though still young, she declared her intentions to depart from Adlehyde on a journey to make her own stake in the world. Her parents did not agree with this decision, but they could see that she could not be dissuaded without completely crushing her spirit - having once experienced this same call themselves. And so they agreed, with one request - that she hold off on her journey until she has spent an acceptable time preparing for the road and, if at that point she still feels the urge to leave, they will let her go without complaint.

She spent quite a lot of time in training. She learned how to defend herself and how to use Crests, but during her studies she also found she had an interest in alchemy. It became the primary focus of her studies, and she hardly noticed the time pass by as she began to learn more and more about the way the various ingredients interacted with each other. In those years she spent in study, her ambitions had shifted. She was not interested in merely making a name for herself. She wanted to affect the world itself, to make it a better place. With her mixtures, she felt it was possible. She could think of nothing better than improving the world, and in doing so achieving the renown she desired. And by selling her mixtures along the way, she could make the money she would need to make her dream a reality and continue her travels safely.

It was only when she felt there was nothing more she could learn from what resources were available to her at home that she decided it was finally time to make good on her decision to leave. After a tearful goodbye with her friends and family she set out with a wagon, a horse, and a supply of ingredients, potions, and gella to get her started. To avoid relying too much on her family's reputation on the road, she decided she needed a new identity. And so, she became 'Jay' - potions master and merchant extraordinaire!

In the past, Jay used to travel from place to place in a worn-down old wagon pulled by a nameless horse. However, after the attack on Adlehyde by the Metal Demons, she stayed in the city long enough to ensure it would be alright without her before bequeathing her horse and her wagon to the sole employee of her old store in Adlehyde (Heather Éclair) before departing with her friends in a machine they called the Carakin - an armored vehicle acting as their mobile headquarters, equipped with everything they need to function as a business and live day to day.

This was the start of the Caravan Kinship, and they remain strong to this day.

Crest Sorcery: Jacqueline's primary form of self defense. She was trained by her mother, Madeline Barber, who is a talented Crest Sorceress in her own right. She was also the one who supplied Jacqueline with her current Crests. While she primarily seems to use Earth-based Crests, she has been seen using Crests of other elements, as well. Of late, she's begun to train herself to use Crest Sorcery of every element in order to broaden her horizons as a Crest Sorceress.

Potions: Jacqueline's specialty and main source of revenue. She always carries a number of potions on her person, with a wide variety of different effects. She's always looking to improve her product line, however, for herself and for the good of Filgaia. Most of her mixtures are offered for sale to any interested customers, though the more dangerous ones are kept for her own use only...or on request.

Vehicle Proficiency: From her wagon, to the Carakin(in land or amphibious mode), to a Gear, Jacqueline seems to be quite talented with vehicles of all kinds. She seems to adapt pretty quickly to their use.

Mediums: In her travels, Jacqueline has come into the possession of various Mediums. Her initial Medium, the Stone Medium of Grudiev, was given to her by the Guardians at the Guardian Temple, but the others she found in various places. As a devoted Guardianist, she appreciates their aid and calls upon it when needed.

A trading family hailing from Adlehyde. Frederick and Madeline have since retired, leaving their three sons to handle the business.

The rest of the relationships section is under construction!

A Small Sample of the Goods!

Despite her innocent appearance, Jacqueline has done some questionable acts that, when looked at as a whole, portray a darker side. Is the appearance of a mild-mannered apothecary really just a front for a criminal mastermind? (Probably not.) 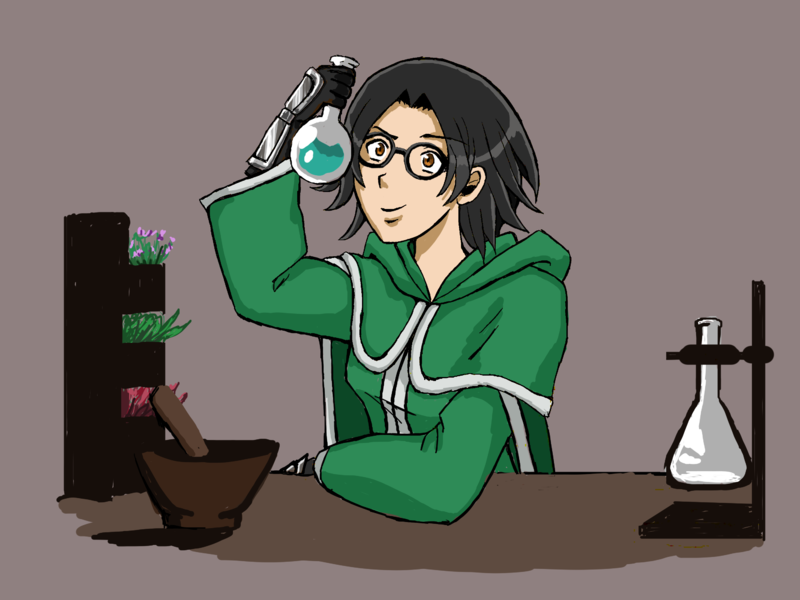 Jacqueline in the middle of an alchemy session. Art by User:Hibi!