"Come on, Lieutenant. We have a long road ahead of us."

Leon Albus is the commander of one of Kislev's elite commando teams, the Black Wolves. Kislev's high command accused him and Lily Keil, his second-in-command, of killing their entire team while trying to turn coat to Aveh. Rather than face a court martial, they ran from the team sent to arrest them and quickly had bounties placed on their heads. Despite becoming a Drifter, Leon retains a serious, results-oriented military mindset. He also retains a terrible sense of humor and his ARM, a fold-out sword and shotgun combination designated Argent Divider. The deaths of his men has affected Captain Albus deeply, though, and he is more reticent than he used to be. He continues to work with Lily, as a Drifter now, and seeks a dangerous automaton ARM called "Gryndille."

Leon was one of countless orphans on Filgaia, having lost his parents from a young age. He scarcely remembered where he grew up. He mostly remembered being rescued by Harkon Albus, a Kislev soldier on a reconnaissance mission led by Dietrich Keil. Harkon took Leon home, adopted him, and named him. Leon was only four at the time, and he remembers almost nothing of those early years. As he grew up, Kislev soon became his home, even if it wasn't his birthplace.

When he came of age, he entered Kislev's military academy. His closest friend, confidante, and eventually more was Lily Keil: the daughter of his father's commander, who was constantly at his side, and they made waves together. He kept a secret of hers: that she could use a form of magic different from Crest Sorcery or Symbology. Together, they rose to the first and second place of the academy. If it weren't for Lily's secret, she would have been in first place. When they graduated, they entered the service and joined the long-running war between Kislev and Aveh. They proved effective officers from a young age. They were promoted to the Wolves, a Special Forces unit commanded by Lily's father, Dietrich Keil.

The Wolves were made of small squadrons, each given a name. Leon was given command of the Black Wolves, one of the newest squadrons. Lily was his second in command. Together, they struck more than their fair share of victories against Aveh. They also had some successes against Aveh's Gebler allies. However, things went awry when their squad was attacked by an automaton named Gryndille. The machine killed their squadron, save for Leon and Lily. It bolted -- and the Kislev troops that found them tried to arrest them, accusing them of working with Aveh forces.

They went on the run, instead, and came to Adlehyde as Drifters. 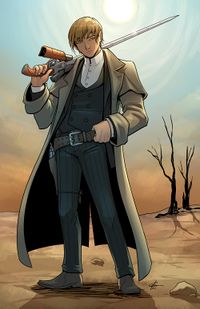 Leon shortly after arriving in Adlehyde.

Leon and Lily arrived in Adlehyde, where they began taking jobs. They met the likes of Josephine Lovelace, Riesenlied, Cassidy Cain; they also encountered Jude Moshe, who attempted to cash in on their bounty. Despite this, they eventually formed some tenuous alliances... which were tested when the Metal Demons laid siege to and destroyed much of the city. After that, they began to work with the Yggdrasil Alliance, in hopes of finding a solution to this threat.

At the same time, they chased rumor of Gryndille. They located the village of Mt. Eldrin, which was said to have been destroyed by the ARM. With Riesenlied, they sought to enter alone -- but Fei, Jude, and Josephine caught up with them, thanks to timely transportation by Bart Fatima. Together, they uncovered a grim truth: other Wolves units were attempting to hunt down Gryndille, and attacked them. Lily's father, Dietritch, was implicated in the result.

They ultimately headed west, both on the wishes of the Guardians, and to find the ruin that they learned might exist: Ash Hare.

While in the Badlands, Leon set about searching for Ash Hare, even as Lily's sorcerous abilities deepened. Eventually, they uncovered the ruin. Inside, they located a number of powerful ARMs -- and a powerful automaton acting as a guardian for it. They ultimately overcame the dangers of Ash Hare with the aid of Riesenlied, Noeline, Jude, Josie, and Fei. Within, they found a recharge station for Gryndille -- and conclusive evidence that Gryndille was directed, though perhaps not controlled, by the Kislevi military. They also located Gryndille's next target: the Kaiser's summer palace.

The Black Wolves were reformed as a mercenary company, with Leon at the head. Their first job was to stop the attack on the palace. They both managed to defeat Golem Sado, a Golem controlled by Keil's forces, and then stop Gryndille from murdering the Kaiser. The Kaiser was taken to safety, and they cleared their names -- even as Colonel Keil and his men fled the destruction with some mysterious benefactors.

Afterward, the Black Wolves assisted the Fereshte in its maiden voyage -- and then fought against the Metal Demons at the Pleasing Garden. The Fereshte crashed, and they were all whisked away to Lunar.

On Lunar, the Black Wolves set-up shop in Vane, in a bar called the Wolfsbane. They met Argus, a former cleric of Althena, there. Leon helped discover the location of the Fereshte on Taben's Peak. The Wolves also accepted a job from Thessaly, investigating Cardinal Runette Forton. They located evidence that she held heretical beliefs, which they passed along.

He ultimately helped get the Fereshte airborne again, though only in time for it to be heavily damaged in its flight to Azado -- and its flight away from Sin. The airship crashed, but the Black Wolves helped activate the Elw teleporter that returned them, and many other Drifters, to Filgaia.

Argent Divider has two modes. In shotgun mode, it looks like an over-under barrel shotgun; the topmost barrel is narrow and rectangular, while the bottom is more traditional. The top barrel fires lances of silver energy. The bottom can be loaded with regular slugs and specialized rounds. Argent Divider can also be folded out, to form a straight double-edged longsword. However, it can project a blade of light along the length of the blade. It can also fire other energy blasts.

Raid Funnels are triangle-shaped devices, which float at his command with a rudimentary A.I. Leon currently has three of these ARMs. They are capable of striking at an opponent directly, by flying into them. They can also create an energy barrier between the three, which is able to be positioned between Leon (or another) and incoming attacks.

The Kislevi Six Hews Style is a style of longsword fencing that dates back to Kislev's founding, and is so named for the six perfected strokes created by a master in 122 PC. Leon was taught this style by his father; he knows four of the six strokes that lend the style his name. He has made slight alterations to it. The style tends to involve long, sweeping, two-handed strokes and short-range bursts of chi that are channeled through the wielder's weapon.