Once, Talia was an assassin in the employ of Lubov Yemelin, a nobleman from Pendrago. She was the bastard daughter of Lubov, used as an assassin because he saw little use for her. She resigned herself to that life, while clinging to the twin brother trapped there with her. One of these jobs went wrong in the best possible way, though, and several of her friends fought to free her. She is not yet sure that she deserves to be free -- and she fears for her brother, who she wasn't able to bring with her -- but she has a shaky resolve to try to make something better of her life. Talia still uses ice magic and her short sword, Mirage, a strange blade with teleportation magic enchanted into it.

Talia during the Rolance-Hyland War.

Talia is the illegitimate daughter of Lubov Yemelin, a minor nobleman of the Rolance Empire, and a thus far unknown woman. She speaks little of her parents, finding the topic unpleasant and unable to be changed. Nonetheless, her upbringing was a violent one: from a young age, she was trained in assassination, stealth, and combat styles that emphasized the use of a short sword and parrying dagger. By the time that she was thirteen, she was murdering Lubov's political enemies in the shadows. The same fate was shared by her brother, Ivan. The details of this time have gone unremarked upon, and most of what she saw of the world was what her father permitted her to see.

In a play to increase his own influence, Lubov sought to worsen the war between Rolance and Hyland covertly, and then use his resources to give Rolance the upper hand in a time of crisis. To this end, he had Talia work for Chancellor Bartlow of Hyland. She played the role of a minder for the Oasis Free Company, working with Kaguya, Matilda Whitehead, and Janus Cascade. She also befriended Lydia Seren, and involved her in the mission to bring down Lastonbell's walls and allow Lastonbell to fall to Hyland's forces. At the same time, Talia acted as sellsword, gathering information for Lubov on Glenwood and Meribus.

Here, she enjoyed her first taste of freedom, and met Seraph Amaranth at her heist at House d'Armagnac. She then met Katherine Weaver, thinking the two unrelated. Her activities as an adventurer made her some acquaintances, and deepened friendships with both Amaranth and Lydia. She also had her first taste of actually helping people, and fending off Malevolence, especially when the Saint of Sinners descended upon Lastonbell.

Ultimately, Amaranth and Lydia helped to free Talia: stopping her from assassinating Cardinal Forton, and then -- after turning on her allies -- from using an elemental golem called the Earthrager Optat Aprum from massacring helpless Hyland soldiers. She won the enmity of Kaguya with her actions, though. Even as she fled to Azado, to find her brother, Kaguya sought to kill her. She nearly did -- but a timely rescue from Amaranth saved her, and Talia was whisked away to Filgaia with the others.

Talia and Amaranth soon went from flirting to dating. She moved into Amaranth's house, the Festina Lente. This helped her adjust to life on Filgaia -- with adventure, romance, and a helping of saving the world from Mother and the Photosphere. Talia also got to know Seraph Ragnell, Ammy's sister. She also learned of her connection to the mysterious K.K. and thought, just prior to Vinsfeld Rhadamanthus sending everyone to Lunar, that Ragnell died with the Trial Knight. She, along with most other Drifters, was sent to Lunar by Rhadamanthus -- and to Spira, rather than lands that she knew. 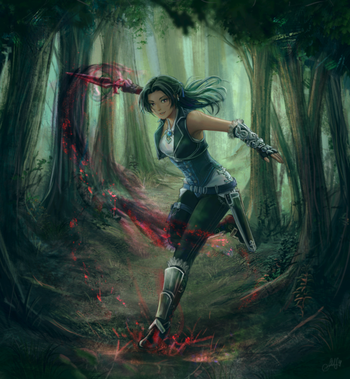 Talia after arriving on Spira.

In Spira, Talia reunited with her brother, Ivan. Ivan remained in the employ of Lubov, working with Althena's Guard in their invasion of Spira. Ivan, initially, refused to leave Lubov's service, feeling that he had thrown his chance away for redemption. He also went after the Caravan Kinship. Talia and Lydia helped to protect them, and eventually began to break through to Ivan, with the help of Ammy, a resurfaced Ragnell, and Jacqueline Barber. Eventually, they stopped Ivan from sacrificing himself, and fought Lubov off -- though his demise seemed uncertain, given his power to heal.

Shortly after, they traveled to Macalania Temple. There, Talia found something strange in Lefay, the Trial Shrine of Water: a pendant with House Yemelin's crest, from a lost place known as Lyonesse. She wondered what this might mean -- and continued to after being returned to Filgaia by an Elw teleporter inside Lefay.

Talia has one magical weapon: Mirage, a short sword that has a single edge, and is slightly wavy like a eel. The sword is a former Divine Arm for a Seraph who died, and is imbued with some powerful shadow elemental magic. The great power that Mirage has is that, when thrown, it allows a wielder who has magically attuned to it to teleport to the sword. The sword has to hit something -- a person or object (including pieces of architecture or landscape) -- for that to work. The attunement is a simple process of focusing on it, until it mentally "clicks" into place.

Her fighting style was taught to her by Sasha Zhirov. It uses a short sword as the main means of attack, with a dagger as an instrument for off-handed strikes and parrying. It is very quick; Talia has customized hers to emphasize the short sword (because she can teleport with it), and favors her off hand weapon for defense.

Because she is from Lunar, Talia has the Blessing of Althena. She can use water and ice magic; she tends to favor ice, but does some thematics with mist. A lot of her spells are buffs and debuffs; Talia does, however, use black magic and has developed some offensive uses for her spells.

She also has a collection of items that she acquired. This was through entirely friendly means. These include: 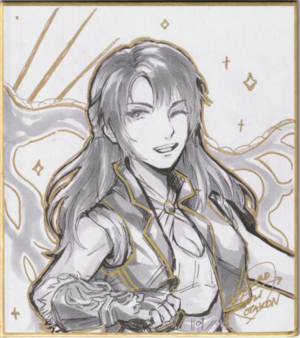