Talise Gianfair is a child of nowhere and everywhere. Born on a ship of miscreants long since lost, the bastard child of a Beastwoman pirate and a human con man who vanished along with the ship, she grew up wild, free and often afoul of the law, and with a thirst for adventure that took her away from the loss of her childhood home and across the Salyan Desert. In her heart she's a storyteller and a singer, the sort to knock back a couple of mugs of mead and sing songs of heroes long dead, favouring those of the Dragonmasters. But she's also a fighter at heart and a talented swordswoman, and she's learned by necessity to survive the badlands and the sea alike - and more recently to survive a world in which her Goddess seems to want to ban everything she finds fun. Now finding herself in a strange new world, she makes the most of it - and turns her eyes towards the lost treasures of the Blue Star.

Gianfair is the outcome of a drunken one-night-stand between a Beastwoman privateer named Tanin de Gianfair and a sly human con-man named Clyde Rath. She was born on Lunar, aboard a privateer ship called the Lunabelle, unwelcome in most ports for its crew of ne'er-do-wells.

Gianfair never had a formal education, though her father taught her how to read and write. She spent about half her time aboard the Lunabelle and the other half skipping from port to port or landing spot to landing spot. She grew up with two primary role models aside from her father. The first was her mother. Tanin de Gianfair was not only a strong-willed woman with a fiery temper and a big smile, she was a complete badass as a fighter, a talented swordswoman who could defeat most people on board the ship. Her second role model was a man named Piet Wilk, an older man who taught her most of her repertoire of old Dragonmaster songs, particularly introducing her to the story of Dragonmaster Chloe, the Beastwoman Dragonmaster.

When Gianfair was about ten, the Lunabelle was chartered for a dangerous mission. Understanding the risk, Tanin handed the ten-year-old Talise off to Piet and put them ashore in Dalton, promising to come back safely. The Lunabelle never returned to port, and Gianfair sunk into a deep misery.

She fell into the care of Piet, who cut a deal with the local thieves' guild and found the pair a little shack to stay in, the old man turning a pretty penny by peddling treasures. Talise proved something of a burden, too young to have many useful skills of her own, but to his credit Piet took good care of her anyway. As she grew up over the next few years, Talise learned from him: She, too, gained a good singing voice. She even learned to play the lute. Around the age of 13, she took to sitting by the docks and playing, singing songs about the Dragonmasters and collecting coins in her hat. Her li'l-minstrel act even had an audience: With Althena seemingly returned, more people became interested in old tales. Talise even heard tell of a few visions of the Goddess in the water.

Through it all, she never forgot her parents, and when she turned 14 - the traditional age of Adventuring Pipsqueaks in Japanese adventure shows - she stole an old sword, invited Piet to come with her, and set off over the horizon. What inspired her all the more was the announcement of a Dragonmaster - Ghaleon, a man dead a thousand years. She knew Ghaleon from the old stories of Dyne and, while excited to see a Dragonmaster, was also confused and disappointed - confused that a dead man could be Dragonmaster, and disappointed she'd never get to be one.

Booking passage on a rickety ship northward, Gianfair headed for Meribia, and she and Piet took to exploring. The two were joined by at least two more young party members (who I leave undefined in case someone wants to app them later) as they took to the countryside, exploring old caves and ruins and occasionally robbing fat-cat travellers for their gold. Over the next few years, Talise made a name for herself as an adventurer, but increasingly came to cross paths with Althena's Guard. She came up against one of their initiates when she was just fifteen, and promptly got her butt handed to her in humiliating fashion as her offensive style did nothing against the swordsman's more defensive style. She fled further away from Meribia, back towards the Badlands, ducking Althena's Guard wherever she could. To make ends meet she fell back on singing again.

The straw that broke her back, though, was the next year - when the church outlawed singing and drinking. She sank and drang anyway; someone from the Guard came and attempted to take her into care, resulting in a swordfight in which the 16-year-old Gianfair again got spanked and had to run away. From there she kept to the badlands around Dalton and Larpa and the broader Salyan Desert, occasionally traveling elsewhere by booking passage on ships under an assumed name. With survival on her mind now, she took to ruin diving again. It was her adventuring in this time period which brought her sword and gauntlets into her care.

Ultimately, Gianfair's adventuring saw her pursued into an old ruin somewhere within the Salyan Desert. After a chance tumble, she found herself deposited in another world, where a woman named Lynnai and a woman named Lestaci picked her up and carried her to safety. That's when she discovered she was on the Blue Star now - and stuck there.

Adlehyde: X Number of Women, a Girl and a Chauncey

Over the course of her time on Filgaia, Talise fell into the company of Ida, another Filgaian, whom she resolved to learn from, and Sephilia, a young girl from Lunar, whom Talise resolved to protect and get home to her parents. The young Etone trainee, Rosaline, joined the small group not long thereafter as the two went in search of a bandit base.

Talise was soon roped into the conflict between humanity and the ascendant Metal Demons. During the destruction of Adlehyde by the Metal scourge, Talise was seriously wounded in battle against the Quarter Knight Siegfried, barely managing to escape the city with her life. With Adlehyde in ruins, she and her friends moved westward, where Talise briefly stopped to take part in the Lacour Tournament of Arms under the alias name of Lady Chloe Alexandre. She placed fifth overall in the tournament, losing out to Princess Alisha Diphda. Also during this time, Talise began to travel with the notorious Lunarian pirate Layna Manydays, stranded on Filgaia along with her ship.

When an ancient Guardian Temple was discovered in the badlands, Talise followed her friends there. She found little satisfaction in what the Guardians had to say, mainly owing to their attitude towards Zed and Kalve, but grudgingly agreed to help them protect their Statues from the Metal Demons and their allies.

In the following months, Talise found her frustrations with Filgaia beginning to settle in, deepened all the more by the seemingly intractable despair which had gripped her companions, Rosaline and Ida. At her wits' end for how to help them, Talise gradually began to succumb to her own despair, losing most of her confidence in herself and beginning to feel rudderless and helpless. While saving two of the Statues helped, a couple of encounters with Siegfried served mainly to remind her of her inability to help those she felt needed it. The loss of Rosaline to the blandishments of Malevolence nearly drove her to abandon adventuring, a course averted by the timely intervention of Tethelle Cirdian, but left her with a sufficiently deep font of internal bitterness and despair that an encounter with the Trial Knight's Malevolent Domain nearly transformed her into a Hellion. Once again, only the incidental intervention of Sorey prevented Talise from being lost to Malevolence as well.

The encounter with the Trial Knight - and later, with a Hellionized Ida and Rosaline - emphasized for Talise how far she had allowed herself to slide, and how dire the consequences would be if she continued to allow herself to wallow in sadness and self-reproof. Resolving to worry less about trying to save everyone and everything and more about doing what she could, she began to push aside her despair and rediscover her mental toughness, even as she traveled to the ancient Elw garden hovering above Lost July. There, an encounter with the Lord of Calamity resulted in she and others going to a place she thought she'd never go again.

Lunar: Three Women, a Girl, a Spoopy Goest and a Chauncey

Determined to get Sephilia home, Talise traveled eastward with her group towards Takkar, stopping along the way to delve into an ancient ruin - and there discovering a mysterious series of images from the past. From there the group brought Sephilia home to an empty house, where they were visited by a courier, Benedict Greygust, who presented them with an offer of aid from a mysterious benefactor. The Company of the Fox was formally incorporated with that visit.

Returning to central Meribus, the group spent some time in Vane before delving into a flooded cavern by a riverside. Within the cave network, the group discovered perhaps the most ancient ruin ever known, a structure seemingly from the dawn of Lunarian time, with an enchanted door concealing a mural depicting someone wielding either Rastaban or a sword just like it.

Team Chauncey, aka the Fox Company 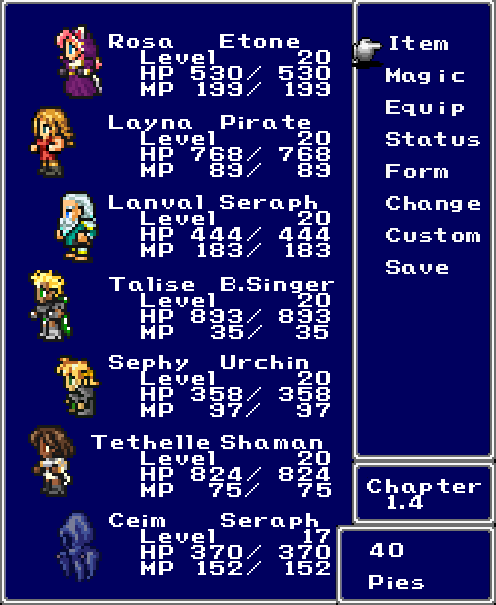 Not So Much You Guys