Asteroid The Kid is a person claiming to be a woman that has an asteroid for a head. It is presumed her original name is not Asteroid The Kid as it seems a bit on the nose otherwise. Nevertheless, she claims to have been turned into an asteroid when she was abducted by aliens. Asteroid the Kid was not well received when observed by the public and since the Battle of Adelhyde has been seen working for the infamous villain and Hellion Virginia Maxwell. Despite her love of horror and dark sense of humor and even her creepy demeanor and appearance, Asteroid the Kid keeps a cheerful countenance that is matched only by her frankly unnerving level of magical power. Since she claims the aliens want her to 'turn Filgaia into a comet so she can explore the star ocean' it's the latter that tends to concern others the most.

Neh hehh hehhh, don't you know? Aliens kidnapped me and now I have this asteroid head. It's shaped like Rigdobrite, that's like having his favor yes? Hee hee. I was bullied for a while but now I have an excellent mistress and friend named Ginny and now I work for her, yes, while never giving up on my dream...of becoming an astronaut!!! Just you wait, Filgaia! Heeee!

Hee, I've got the abilities of a shaman of Rigdobrite, of course, though I also have a rock for a head hee hee. The guns? Oh I just found them in a ruin. They make portals. They don't reach space though. Want to go through and try it out? :D 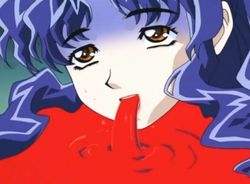