"A sword is only as sharp as its wielder!"

Siegfried is the leader of the Quarter Knights and, in the wake of Mother's torpor, their de facto leader. He acts as their field marshal, but his sense of honor demands that he lead from the front instead of hidden away in the Photosphere. Donning black armor and carrying the Dark Spear, Glumzambor, Siegfried is a force to be reckoned with. He is brutal and ruthless on the battlefield, and his honor only causes him to respect his opponents, while viewing most humans as weak and undeserving of mercy. The conquest of Filgaia and restoration of Mother is his personal mission, which he has sworn himself and every Metal Demon to. 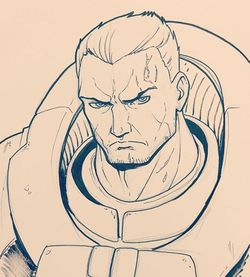 Siegfried without his helmet.

Siegfried is an ancient Metal Demon, having been created before the Demons arrived upon Filgaia. He led the Metal Demons in war ever since, rising to the leadership of the Quarter Knights and then directing their efforts after the fall of Mother. Siegfried has commanded the Metal Demons in their quest to awaken Mother ever since. While his hatred for humanity is notable, he still has a sense of honor, and has had complex relationships with humans throughout history -- though they have only hardened his utter distaste for humans, to an extent that borders on genocidal. The Quarter Knight commands the respect and loyalty of the Metal Demons, and has kept their factions together in the face of war against the rest of the planets.

Siegfried is a master swordsman, who wields the Dark Spear, Glumzambor. The blade is a powerful ARM capable of projecting terrific energy blasts into his opponents -- as well as cutting through even Gears easily. He also enjoys several built-in ARMs on his armor, including a forearm ion cannon and a powerful energy cannon mounted in the chest. 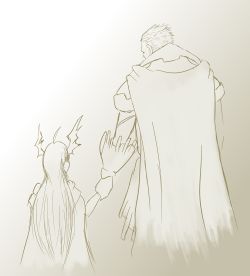 Siegfried and Riesenlied, a little less than 500 years ago.