Virginia Maxwell was a once just a newbie Drifter that's freshly left her backwater hometown of Boot Hill in search of her father, Werner Maxwell. But a chance encounter with Maya Schrodinger led her into an even more fateful encounter with Malevolence, turning her into a Hellion for a time. It was with the tenacious perseverence and the bonds of her closest friends that she was rescued -- and now, with a heart of gold and a will of iron, Virginia is ready to make a difference once more in the Badlands. She wields two small revolver pistols and relies on her quick wit and quicker feet to get her out of trouble -- though her open heart and sense of justice is often just as quick to land her in trouble that she just can't leave well enough alone. Some would say she's a naive ingenue with no sense of the working world, but Virginia has the optimism to believe in a better world where others only see wreckage and ruin.

Virginia was born in Boot Hill, a town of very little consequence and little in the way of harm, in the kingdom of Adelhyde. Even amongst her farming peers and contemporaries, she was born with a relative silver spoon in her mouth -- her father and mother were well off and she had one of the largest manors in town, and had many well-to-do acquaintances that her father knew, such as her Uncle Tesla.

However, even from a small age, Virginia always had wanderlust -- a lust for adventure. Not content to simply learn manners and how to sip soup and primly bow, she always snuck into her daddy's quarters and nicked the ARMs out of his trunk and went to go pop bottles in the back yard, something that her two parents eventually had to properly train her in, given the relative dangers of Filgaia.

Virginia's life would set itself apart when her father went missing -- he left on a supposedly important research mission with his colleagues, but never returned home. Impatient and corralled to her manor, the young Maxwell eventually decided that enough was enough and that she couldn't just live her life on the silvered rails that had been set out for her -- she had to spread her wings and take on the life of a Drifter, something she'd always dreamt of ever since she was a little child.

Her first opportunity for adventure came when Gobs came to raid Boot Hill during the village harvest -- Virginia watched as the monsters abused the villagers and looted gold and supplies from their storehouses. Before anyone knew it, Virginia had snuck away and tailed the raiding crew, slipping in -- clumsily! -- into an abandoned manor. A few fierce gunfights later, she'd managed to single out the Gob Boss and take him down with a few well-placed shots...only to find herself surrounded.

Fortunately, her act of bravery had also inspired the other townsfolk, who barged in and saved her at the last minute. Though she woke up in tears and apologetic of her rash actions, her Uncle and Aunt were both inspiring and understanding -- they knew all too well that she, being the daughter of Werner Maxwell, would not sit still for too long, that she had too large a sense of responsibility to be sequestered away in a little town like this one.

And thus, with a small pocket of change, some basic supplies and her trusted twin guns -- the Rapier ex Bantorain 93R ARMs -- she set off into the wilderness, in search of clues where her father might have gone...

Select Pages from the Diary of Virginia Maxwell

8.5/10 cuddled and then set things on fire with

There appear to be idle doodles of what looks like Maya on the margin of the page along with some comically drawn flowers. It means nothing, surely.

I'm so eager to make friends on my trip out! Diary, I'm going to make sure I record each and every one of 'em, and I'm gonna even draw pictures and stuff! I'm a good artist. Me, Virginia Maxwell, I'm a good artist.

There's a doodle of a figure-eight knot tied with a cute ribbon with Jean's face on it.

There's a tiny figure of Hiro getting flattened by a comically oversized Ruby going 'GWAR' on the margin.

There's a picture of a snowman, except it's got Lemina's face on it...?

There's a picture of Amelia and Silver selling a city marked '10k' in a twirly price tag above it.

There's a picture of Bart whipping a candle. A heart pops out of it.

There's a picture of Lily with an eyepatch and a horn on her head, which reads "PUNISHED LILY"

Elly is drawn with an immensely tall flat-top cut, for some reason, charging her arms back like she gonna sonic boom??

Kahm is drawn with an astonished expression and a quote bubble of 'OHHH MAH GAWWDD' on his face.

Gwen is seen riding a rocket-powered mailbox of into the skies. Up up and away!

Sephilia is dancing with Lord Chauncey, how cute!

Not feeling ambivalent about anyone yet!

Ambivalent is the worst feeling to get about someone. How does that happen anyway? Ugh, I hope I don't come across like that. What if I went to a party and someone was like, "That Maxwell girl sure makes me feel ambivalent."

Ohh, these people make me feel patently :(. Yeah, not sad, not angry, just :(. It's kinda like how you get up and make yourself ready for the day and pull your socks up and lace your boots and then WHAM! A horse goes and kicks you in the face. There's no other way to express that except that it makes me feel :(.

This hasn't happened or anything. 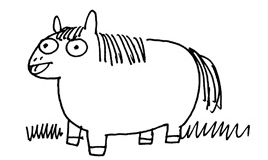 A horse gangsta appears to be carrying a six-shooter and a cocky grin, saying, 'nice house you got there' and 'shame if something happened to it' 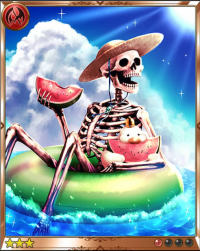 Don't give up, skeleton.