"Hm? Terribly sorry! I must've been lost in thought."

Honored graduate of Sielje's sorcerous academy and daughter of a high noble family of Meria Boule, Lady Eleanor Klein has to all accounts lived something of a charmed life--or else, maybe she /is/ the charm. She spends little time in her family's holdings overseeing the eastern port of her home nation, though. Apparently not content for leisure or cloistered study, this friendly young sorceress has joined the organization known as ARMS, despite her own noble connections and lack of military experience. Indeed while she's quite knowledgeable and even pleasant, she's rather easily distracted, entirely living up to the absent-minded academic stereotype. That makes for a question the rumors can't answer, though: exactly what is this bright young sorceress /doing/ in another noble's private army?

Raised in a position of privilege, Eleanor was considered an extra blessing; not only the first child of her parents, but an elf, clearly good fortune. This would set the tone for much of her life; the heiress to the Marquessate of Klein ahead of the younger siblings she would gain in short order, she knew from an early age that she would grow into many responsibilities. She also displayed clear talents for knowledge and learning, as well as the mystical arts; years before most of her peers would even make the /attempt/, the young elf passed the placement exams for Meria's preeminent preparatory school, Arcadia Lyceum.

Schooling would be the nature of her life for most of it thus far; from being the youngest in all of her classes at one school, she was accepted at eleven into the Sielje Academy, where she would study Crest Sorcery among other things. By fifteen she was a graduate, and moved on to performing research at the Academy as a Crest Sorceress in her own right, and asssisted many archaeological expeditions in the Great Sea. This would introduce her to Drifters.

Amidst a number of terrible accidents among her colleagues, Eleanor would abrubtly go on sabbatical from her studies, returning home for a time. She was invited at seventeen to the changed ARMS after its tragic beginnings as a founding member by Lord Irving Valeria, though many would wonder why she'd agree. But there was the matter of actually joining them to come...

The arrangements having already been made to join ARMS early--Eleanor being among the earlier recruits Lord Irving Valeria contacted--it was meant to be a trivial thing that, now that her previous expedition had ended, she was going to be joining them in the upcoming operation against Odessa, meeting the other members finally and bringing with her an addition. Things did not go to plan; her ship delayed, Eleanor found herself in Spira with the rest; the fact that she /technically/ wasn't a Drifter made no difference to Vinsfeld's magic and plans.

Eleanor came to on an island, in the midst of jungle. ...But life on and around the sea wasn't strange to her, so while she tried to figure out what had happened, she found /people/, and soon was trading on her knowledge of ships and a bit of barter to secure passage to the nearest large port, in hopes that an urban center would at least give her a place to start. She did not /immediately/ make friends, having to learn quickly not to show her ARM even moreso than back home, but her magic at least proved helpful.

Once in Luca, she knew she was awaiting a meeting soon--and after wandering through the awful heat that after days was really catching up with her, she met Marivel, and so began to gather with the other members of ARMS. Soon after, she heard reports of a strange 'machina woman', and managed to link up with Zhang Xiu Mei again, her best friend, who had supposedly fought down from the Highroad. The noblewoman would do a little exploration to find where her friend had been, run into a very unpleasant bird and a few pig men, make a couple of friends, and discover Blitzball.

In the wake of the fiend attack on Luca, Eleanor--who had already decided it was time to get to work on their mission, both of diplomacy and of action--would have to plot her next move. From here with ARMS, she was part of the consideral upheavals that would result.

She participated in the ill-fated Operation Mi'ihen.

She fled the city during the Invasion of Luca.

She was a part of the radio tower on the Thunder Plains, and the recovery of the Guts-Dozer.

And of course, she was at the battle that became a great multi-way clusterfuck at Macalania, taking a great injury in the flight from Odessa's forces that Marivel and Avril Vent Fleur were able to (separately) heal enough for her to get by. She ended this by finally escaping Sin's presence via the Elw teleporter at the end of Lefay, having traversed it with Varius and thus Xiumei.

Eleanor Klein was just here to have a good time and is feeling so attacked right now. ...No, seriously, the return to Aquvy proved to be pleasant in some respects and absolutely terrible in others, with Xiumei's difficulties and Odessa's attacks stretching to include Sielje itself. She has become somewhat more militant over time, seeing the necessity for greater offense, and has picked up an old Veruni ARM in a ruin that she is beginning to use more. She continues to have visions.

After more adventures in Aquvy, Eleanor attended the Filgaia Summit as a member of ARMS, contributing both to security and to public relations for the organization. When it was attacked by Odessa, she went with the others for the counterattack on the Warwing Varuskias, meeting Ganondorf Dragmire once again and beginning to understand more of his nature... And slightly more of what may link them. After talking with Xiumei, she decided it was time to start delving again into the incident that precipitated her visions.

Unfortunately, that won't be immediate; an unexpected conflict at the Main Gate saw Eleanor flee with the others from Megaman Juno, all the way to Spira and Home.

Eleanor is not only possessed of a significant academic education, but she is also an accomplished sailor, a decent shot, has a good throwing arm, and of course, is a Crest Sorceress. She's also quite fashionable!

While she tries to keep in practice with her boomerang, still a useful tool in the right situations, she has found a need for more firepower in combat. To that end, she's begun wielding an ARM rifle she found in an ancient Veruni ruin, marked 'Ascalon'. It's a thing of bronze and gold, nearly as long as she is tall, and she is better with it than is strictly proper for a young lady of Merian nobility. She originally learned to fire ARMs from Drifters she met on archaeological expeditions before ARMS, but has plenty of comrades to hone her technique with these days.

More notably however, she is a Crest Sorceress, a graduate of the Sielje Academy and proficient in the use of all standard spells and Crests of that style, as well as at drawing out the power of items magical and mundane. She further specializes in a specific variant of Crest Sorcery involving a few special Graphs that she possesses, that alter the effects of her elemental spells towards subtler means aligned with the magic of Time. The truth is that she's better with subtle effects and support than she effer was with the grosser, flashier forms of magic, though she can throw a fireball reasonably well enough, and she's leaned into this talent, tending to carry with her magic of healing, buffing, and other helpful types. On offense she'd rather rely on friends, or perhaps a weapon or magical item that can replicate offensive effects for her. She can work the elements, heal wounds, speed and slow movements, and perform general feats of wizardry with grace and aplomb, and her Crest Graphs allow her to perform many spells in mere moments without needing to prepare a ritual environment.

The Mystic ability she learned as a Crest Sorceress, meanwhile, is a good portion of why she can use items as effectively as she can. She's trained to use Stuff, sure, to rely on things, but with her magical power she can draw out the essence of a thing, such as allowing a single heal berry to mend the wounds of many, or drawing out a magical stone's power to create an ice attack. Many more items than some people might realize have magical properties that she can draw on to perform effects. These effects are not usually huge, but they can be handy.

Indeed she focuses a lot on special magical items in dungeons. Most notably is a strange flute she keeps handy, capable of playing melodies that confuse and weaken opponents as well as shield and reinforce allies. She also keeps a rod handy enchanted with the power of ice, which she uses typically to freeze and chill things, and knows the trick of enhancing a battle group with a Lucky Card.

She also knows how to use a Teleport Gem properly, which means she is incapable of accidentally accessing the super secret trainer for Crest Sorcery. We better get a Lilka!!

Eleanor also has secrets. They are secret. Her habit of staring into space suddenly in the middle of conversations surely has no strange implications whatsoever.

Eleanor's spells are based on the principles of Crest Sorcery, specifically the variant taught at the Sielje Academy of Magic. Rather than dividing magic into black and white, her combinations can create a variety of effects that could count as either. Each spell requires two Crests--elemental symbols infused with power--to be inscribed on a Crest Graph, which contains careful writings that allow a spell to be called forth quickly and easily. Eleanor uses a special set of Crest Graphs that were a major point of study for her in school, which bend some of her spells to have effects associated with time magic, and others to affect multiple targets or manifest more strongly than other spells. While Eleanor knows how to erase and reapply Crests, the process is sufficiently laborious and the materials sufficiently inconvenient that she doesn't change them without a reason and some time. She also carries a number of Crest Caps, items that can contain a single use of a spell that others can use.

The current preparation of her Crests includes:

Other common spells include: 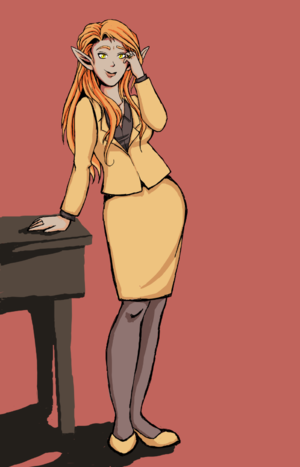