"The smile's always free... that's just how we do our service."

Lunata Croze is the daughter of famed Drifter and archaeologist Meredin Croze, whose exploits are very well-known around the Ignasian region.

Lunata was once just a waitress at Adlehyde's Starfall Saloon, warm and friendly to both newcomers to the establishment and to people she knows. She was by and large removed from the Drifting life her mother has embraced, spending most of her time working at the tavern and sometimes travelling with the local caravans to other towns to make grocery runs for the saloon's specialties. Outside of the table-waiting, she's a bit shy and timid around strangers, but much more open and comfortable around those that she's known for a long while. She's always concerned that her mother might injure herself in her Digs, but she knows that she can't stop her wanderlust...

Which is why she eventually consented to accompanying her to the Singing Ruins, Rujm el-Hiri. Accompanying her and a team of Drifters to the depths of the world, they discovered a Gear there that would change her life forever. Assaulted by Metal Demons during the excavation of the Winged Gear Rephaim, Lunata fell into the cockpit and made a bargain with the lamenting voice of the past, binding her to the service of Ge Ramtos.

Visions of death and destruction cloud her mind from time to time, at the same time imparting her with the skill and muscle memory of those that have been consumed by the Key of Rephaim before her. As Bearer of the Key, she learnt that she can manifest a deathly spirit from within by the name of Ge Ramda, who both protects and urges her into battle. She travels, both with Jacqueline Barber, Shalune Amira and the Caravan Kinship, as well as with Bart Fatima and the Yggdrasil Alliance, in search of answers.

Will Lunata succumb to the punishment of those that desire the Wheel's powers, or will she find a way to escape the cycle of death that she has been ensnared into?

Lunata Croze is the daughter of Meredin Croze, famed Drifter and archaeologist specialising in Zeboim-era Relics and Ruins. Meredin is a well-respected expert in the field of Relics for more than twenty years, and has published many academic journals about links between the Relics many Drifters have found in the field and the growth of humans in Filgaia over the years following the Day of Collapse.

Lunata grew up amidst books and journals in the shadow of her mother, who married late to a respected ARMs Meister of Guild Galad, Atheron Croze. When Lunata was seven, the couple decided to move to Adlehyde in order to better centre their base of operations and Digging projects. Despite both of her parents' enthusiasm for Relics and ARMs, however, Lunata herself never really adopted much of a like for them -- she viewed them as dangerous and frightening, and that while it's noble that people wanted to discover what happened in the past, she more respects the work of the Ethos and those that are trying to make the current world a better place. As such, she's a bit distant from her parents, especially in her teenage years.

When Lunata was thirteen, she started working at the Starfall Saloon to make pocket money for the things she wanted to buy. She found the job to be pretty fun and engaging -- and before long, she started to really be able to name the locals from the Drifters, and even make the latter feel more welcome than usual. She's nicknamed "White" due to her very pale skin and white hair, something that's a bit of a tease and a joke amongst the staff and the locals both.

Memory Learning - Ge Ramda is able to project a vision of death from within its banks into Lunata, granting her a keen sense of the muscle memory needed to execute techniques from those that have been consumed by the Key in the past.
Death Medium - As an apparent Medium of Ge Ramtos, Ge Ramda is able to channel some of the Guardian's power through it, though Lunata is not trained or experienced enough to Material-summon the Guardian.
Soul Sacrifice - The final and most terrifying power of Ge Ramda is its ability to shred a small part of Lunata's soul and shape it into life for others, or as a barrier around herself. 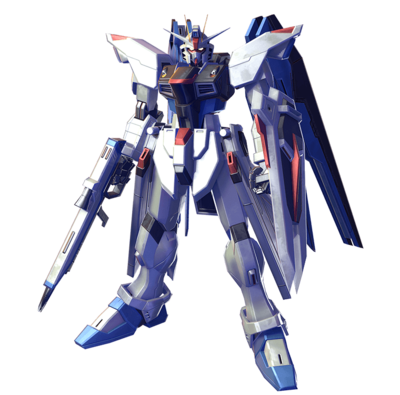 The Winged Gear Rephaim is a humanoid, bipedal Gear that stands just shy of 16 sharls (approximately 50 feet), possessing a sleek and slender bevelled appearance that suggests thinner armoring than most standard Gears. It has a predominantly white colour scheme, laced with splashes of blue, black and grey primarily centred at its torso and throughout its joints. Its most prominent and eponymous feature are its wings, a paired array of three tapered blue spikes centred upon an ancient golden ring, olden runes scribed throughout its entire surface. Visible hardpoints include vulcans equipped on both the head and the clavicle of the torso, and a skirt-like folding armament that appear to possibly be a high-powered ARM of some type. There are also e-caps resembling beam saber hilts seated on the side of its waist, but it is unclear whether or not they're actual weapons.

Its make is unknown -- the quality and design suggest it is from a time far beyond modern standards, and it appears to be in poor shape. A lot of the actuators and mobility stabilisers appear to have worn out with age, greatly limiting the points of articulation and movement of the Gear. Judging from its design, it looks to once have been capable of flight, but the output of the thrusters and the mechanism design are currently both too damaged to maintain sustained altitude.

I love my mother and father very much. I just wish they would... well, not indulge in such a dangerous lifestyle...

I'm travelling with some of my closest friends now! We man a caravan that we offer our services out of, please look forward to our services!

Sunday roast - If it's Jay, I have to go with our Sunday roast, the classic we always come back to. I hope our friendship continues forever, Jay.

Saturday blend - And if it's Lunie, it's my Saturday blend, because she's always tinkering with old and new...

Caffè Marocchino - A beverage from the east, as Aunt Hilda has perfected... there's a thick dusting of cocoa around the lip of the cup, so you have a drink of chocolate with your coffee... hehe...

Cafè Palazzo - Brew the espresso, then immediately chill, utilising a moka pot. Then, it has a sweet accompaniment, much like Spirit and Miss Kourin... hehe, those two are very cute.

My closest friends! As they say, keep your friends close to heart, and you won't ever be lonely, no matter where you go.

Caffè mocha, Ellurian Classic, Breakfast roast - Ellurian coffee is a rarity nowadays, but the rich notes of chocolate go very well with a dark chocolate mocha blend. This is a beverage that makes me want to sing my heart out.

Bart and his pirate crew seem rough and tumble, but they're really kind. They saved my mother and I when we were attacked by Metal Demons, and I'll forever be grateful for that!

Single-Origin Kislev City Roast - Lily is like a single-origin Kislev city roast. Bold and strong-flavoured, with a robust and rich undertone... but, I feel a slight hint of bitterness in the aftertaste. Please hang in there, Miss Lily.

Aged Sylvalese with an Aquvia blend - Aged Sylvalese coffee is incredibly tart and bitter at first taste, but there's a wonderful aftertaste that blossoms out of it. It's a truly mature flavor. Including an Aquvian light city blend helps make it more palatable. That's just the kind of complex blend Leon reminds me of.

Old Gold Continental roast - Sourced directly from Bledavik, Old Gold isn't a common coffee bean at all, due to the unusual climate in which it's grown. But, it's possible, at the right altitude. We do it continental-style, turning it black until it cracks twice. It really brings out the deep and hidden, earthy and fruity flavors in this otherwise brash and stubborn coffee bean... hehe, that's right, it's a bit like Bart, isn't it?
Fei Fong Wong - Mister Fei's been really kind to me, and... well, I guess we're both similar in that I also fell into a Gear cockpit like he did. ... he's really troubled by some of the nasty predicaments he's gotten himself into ... it sounds selfish, but I really hope I don't have to go through a similar thing.
COMING SOON - ???

Clients of the Saloon

I've met many people around the Starfall Saloon now...

Flat white, two shots - Well, I don't really mean bad by it, but a flat white is what Janus reminds me of... he's got that 'what you see is what you get' kind of feel, though there's a welcoming undercurrent that's perfect for me.

Caffè Macchiato, three shots - A macchiato is a coffee with a spot of milk, which is how I think Eli is... at first, you think that he looks menacing with his powerful frame and bulky stature, but he seems very kind. There's a spot of goodness in him, hehe.

Cappuccino, with a fox - Hehe... doesn't the perfect microfoam in a cup of cappuccino remind you of a stuffy's inside? It's like I can make my own version of Lord Chauncey.

Chai latte, two shots - Somehow, I think chai latte perfectly describes Miss Elly. There's a complexity about her that is nonetheless tempered by how soothing and comfortable she is. It's the kind of beverage that you can hold in both hands and feel comforted by...

Ristretto - With Miss Edna, I feel the elegance of 'less is more'... hehe, she's quiet and has a kind of refined grace about her, doesn't she?

Cafè cubano, demerara - Strong and sweet, two traits I think Mister Sorey has... and there's a perfect infusion of sugar and coffee beans in it, much like how Mister Sorey and Mister Mikleo seem to be one when they're together, hehe....

Iced coffee, two shots, two:one coffee and milk ratio - I like a nice cool iced coffee... and miss Gwen is really cool as well, so it fits, doesn't it?

Asking about red, I ended up where red flowers bloom, where the living only arrive once.
It was a point of arrival, yet it was also a point of departure.

Inch by inch, the fissure connecting this world with another grows larger.
And the princess understood, that this wound would not be healed with time...

At the still-cold lake, raise your eyes and you will see a lone girl racing across heaven.
Will the eyes of the reapers at hand reflect her figure?

Finally! With a lot of hard work... these recipes have come to fruition! It's all because of everyone's help!

From time to time, I get dish requests from people that I haven't heard of. It's... it's my passion and commitment to learn about these foods!